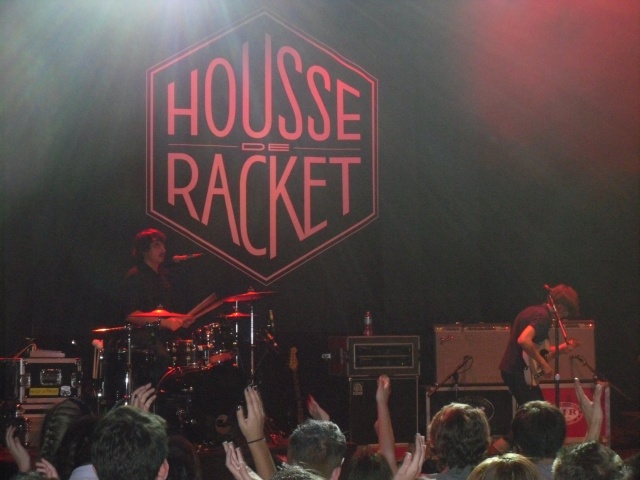 Every beginning of December, Miami becomes ground zero for anything and everything art. Art Basel Miami Beach commonly touts nowadays that it has surpassed its creator, the original Art Basel in Switzerland, in sheer awesomeness. To understand this, I quote Darth Vader: “When I left you, I was but the learner. Now, I am the master.” We’ll leave that argument for the big boys on the executive boards. What is always a point of argument for many is the following: What event do I go to? Spanning for around 3-4 days, Art Basel Miami Beach supplies endless parties, exhibits, art galleries, and shows to satisfy any taste. It’s really a hit or miss. I ended up going to only one event, and it’s all I needed to see. With an unarguable respected art history, France is a staple in these affairs. An art festival isn’t an art festival without them. However, my exhibit was an intimate look at French indie rock/electro pop. The artists presenting their latest work: Housse de Racket and Yelle. 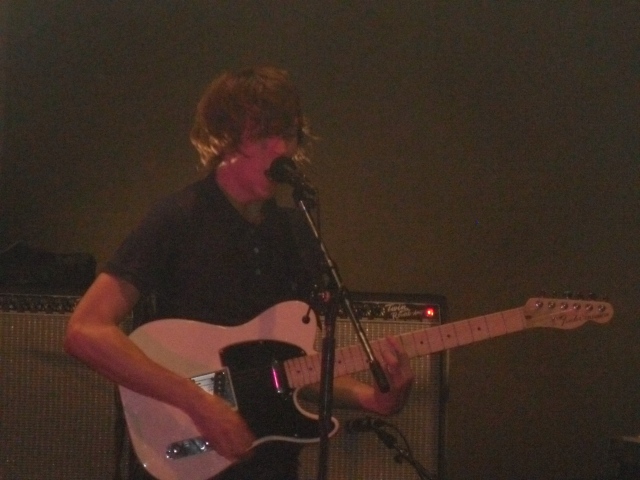 There must’ve been only about 100 to 150 people at the Fillmore Miami Beach that night. It was a relatively small crowd in comparison to the other ginormous events going on elsewhere. The ambiance felt like the show was already over before it began. There were  instruments just sitting on stage. Then, two random guys wandered on stage. It seemed like they were stage hands who decided to have fun and pretend to be the band. One got on the drums, and one picked up a guitar. They were Pierre Leroux and Victor Le Masne, aka Parisian duo Housse de Racket. In a very relaxed voice, they mentioned that this was their first ever show in the US. This immediately indicated to me that I just maybe in for something special and I was right. With the promotion of their second album Alesia evident at the small merchandise table outside, they let the crowd have it. They jammed with an accelerated electric sound that grabbed the crowd’s attention relatively quick. Their synthesizers melded really well with the rapid drum fire while the lone guitar led the charge. 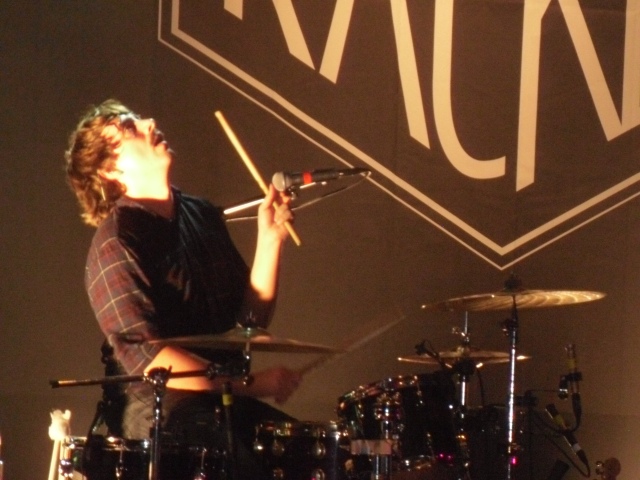 These guys gave reminders of the prominent French group Phoenix. It’s not too far off since they played back-up sessions with Phoenix as well as Air quite a few times. Their album Alesia was also produced by Phoenix’s producer Philippe Zdar. The noticeable difference between them and Phoenix is that Housse De Racket stuck to their native French language. Their music was just as entertaining and dance-worthy as if it would’ve been in English, and it is since they have English language tracks on Alesia, “Chateau” and “Roman”. The set was short and sweet like a good glass of wine. For the individual who is constantly looking for good music to have on their iPod, Housse de Racket is good music. Pierre and Victor are good guys themselves. My brother and I had the privilege to meet them after the show and they treated us just as another cool friend that they just met through another cool friend. After a pleasant chit-chat, they invited us to see them play again at another Art Basel event at some small private bar called the Paris Paris Club. We gladly accepted the invitation. After going through a maze of bouncers and hotel doors and passages, we finally found them huddled with some other friends in small corner right outside the door. We went into the extremely packed venue where they very kindly used some of their vouchers to get share some drinks with us as well as good conversation.  What I remember is that there was a crappy and drunk band that would not get off the stage. I’m glad I can’t remember anything else about them since they were damn awful. We waited and waited with Victor and Pierre for their call to get on stage. It never came. They ended up not performing at all. Disappointment came, but the company with the duo was completely worth it. We gave our cheers and goodbyes in knowing that we will see them again. Will they get more exposure? I’d say yes since they are playing Coachella 2012. 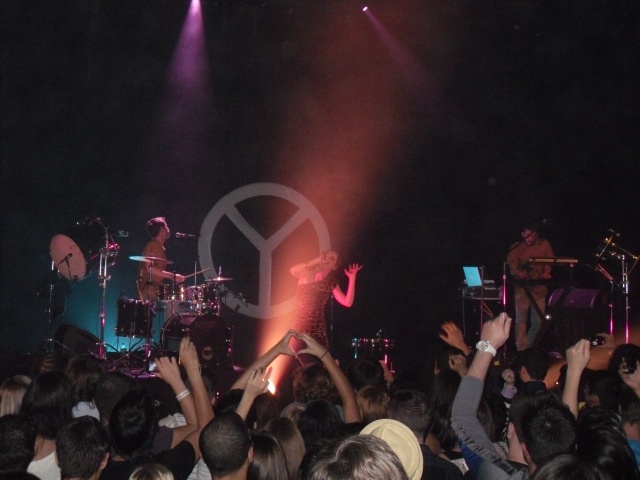 The other artist in this dual French exhibition that night was electro dance group Yelle. Now I was a fan of Yelle when I heard their debut album Pop Up back in in late 2007/early 2008. I did not hear about them at all for a good while. I think I actually forgot I was a fan.  Then suddenly…BAM! There they were in my notification email from Live Nation. I immediately remembered their dance-inducing hit “Je Veux Te Voir”. We fast forward to the day of their performance. With a giant, minimalistic Y overlooking the crowd, the band laid the dance floor foundation with their more somber track “S’Eteint Le Soleil”. Lead singer Julie Budet came out decked in a bee keeper/safari type suit that covered her from head to toe, which was a nod to the title of the their second album being promoted that night, Safari Disco Club. It was a nice musical appetizer before the main course. That relatively small crowd in that noticeably spacious venue was offered a delicious set of non-stop dance.  They ate it up like a pack of ravenous wolves. 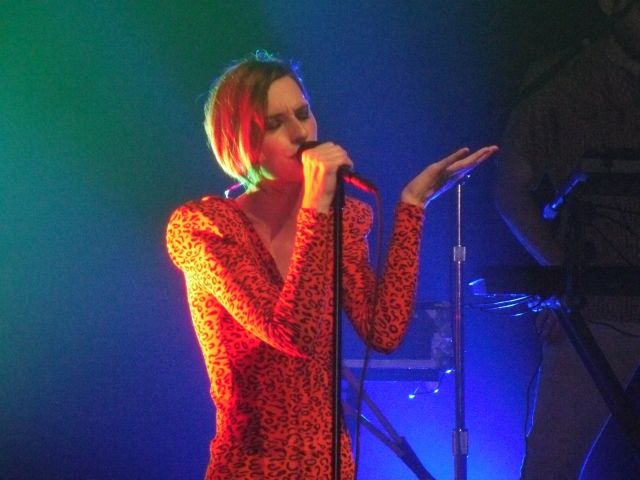 Mon Dieu! Yelle is literally a mobile disco club. With her two partners, GrandMarnier (Jean-François Perrier) and Tepr (Tanguy Destable), Julie was conducting a dance symphony. With dance-injected hits like “A Cause Des Garçons” from their debut album and “Comme un Enfant” from their sophomore album,  the crowd danced up, down, left, right, back, forward, diagonal, and any other direction their human bodies could discover. Slick as a ninja, Julie managed to change costumes three times without skipping a beat. She is a fantastic dancer as well. You can’t help but want to follow and mimic her very hip, aerobic type moves. You get so into her that you wonder why she has to stop and leave. She is that cutesy, sexy and talented. The sole purpose of Yelle is to make you genuinely dance, and to make you smile during their-meet and-greets. They waited cheerfully by their merchandise table as a pretty long line of fans eagerly waited to get their signed posters and CDs, making sure that not one of them were missed. I managed to be at the tail end of the line when I finally got my chance to meet Julie Budet. We smiled at each other and the first thing I said to her was “C’est magnifique!” She smiled even more in delight. 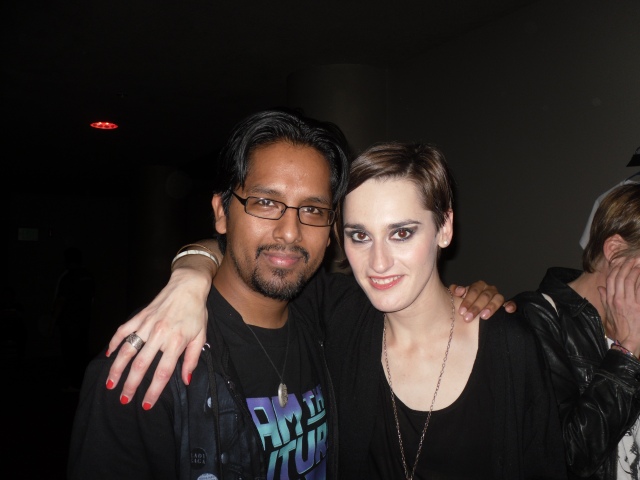